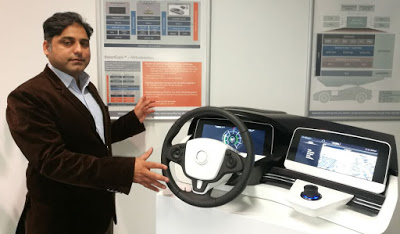 Beginning this summer, vehicle cockpits around the world will become a lot more interesting. That’s when the first production vehicles from a German automaker will roll off the lot equipped with Visteon’s SmartCore™ technology.

In conventional automotive cockpits, technologies such as the instrument cluster, center stack, infotainment and telematics each are driven by a separate electronic control unit (ECU). SmartCore™ combines the functions of multiple ECUs into a single box, or domain controller, which ultimately may serve as the brains for every display function across the instrument panel and into passenger areas.

Integrating control of these functions on a single ECU reduces signal latency, eliminates excessive wiring and saves considerable weight. The hardware can be used more efficiently, eliminating the need to duplicate interfaces for memory, display and video in separate ECU boxes. With new approaches from chip designers, SmartCore™ can generate more computing power to drive an expanded number of functions.

Visteon has incorporated exceptional security within SmartCore™. Downloaded data needs to be signed and authorized by the car dealer. Hardware security walls are built to prevent suspicious applications from intruding into the secure portion of SmartCore™.

A new reality for autonomous driving

SmartCore™ will play an important role in the transition to self-driving vehicles. When future cars are in fully autonomous mode, drivers will be able to take their hands and eyes off the road, shifting their focus to screens along the dash. They can view text, images and video there and interact with the screens, with all this functionality driven seamlessly by a SmartCore™ domain controller. SmartCore™ also will integrate input from cameras and other devices monitoring the environment outside the vehicle, so drivers and passengers can receive information about their surroundings.

In the future, augmented reality will be incorporated into the SmartCore™-driven displays, presenting avatars of people, objects and virtual creations outside the car to the occupants inside. Imagine how all this integration could change your GPS display in an autonomous vehicle, adding detailed information about your destination, images of nearby attractions, audio and video. Your music player expands from showing an entertainer’s album-cover art to presenting a full-motion music video. Eventually, video conferencing could be integrated into SmartCore™, and passengers could play SmartCore-controlled games.

With the first SmartCore™-equipped vehicles about to hit the road, we’re embarking on an exciting new chapter in vehicle cockpit efficiency and integration. Watch this space closely – the story will continue to unfold as we approach the autonomous driving era.

Waheed Ahmed oversees software architecture development of future domain controllers at Visteon. He is focused on next-generation automotive cockpits and their role in autonomous cars. Ahmed has proven leadership and R&D experience in software systems, spanning more than 15 years. Prior to joining Visteon, he worked in the semiconductor industry as an engineer, architect, and scientist. Ahmed earned his master’s degree in computer science from RWTH Aachen University in Germany. He has published six international peer-reviewed scientific papers, filed six U.S. patent applications and authored a white paper on the fundamentals of domain controllers.