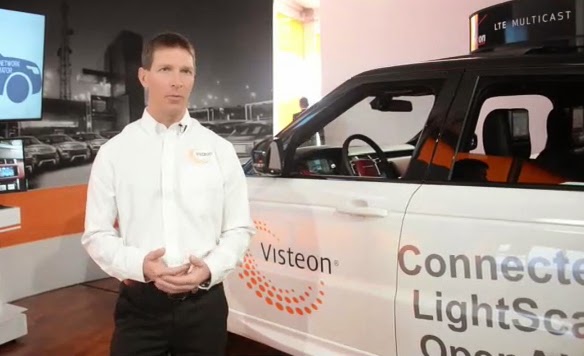 Considering the speed, savings and ease that digital communications have brought to consumers and businesses, it’s frustrating that the task of updating software in vehicles has been a slow, expensive and often difficult process for both the auto industry and drivers:

For a few fixes, such as a navigation system map update, automakers have been able to provide USB drives containing software, but that’s typically only for infotainment systems, and owners have to install these software updates themselves.

Fixing and upgrading software would be simplified if those steps could be reduced to two:

Visteon looked at LTE Multicast with a different eye. We realized that LTE Multicast is an ideal distribution mechanism for vehicle software updates – critical for making the connected car a success. Each car or truck is essentially a listening device and LTE Multicast allows automakers to deliver over-the-air software updates, bug fixes and feature enhancements to all connected vehicles or a selection of vehicles concurrently. The simultaneous nature of Multicast means that network utilization is not impacted and the data cost is equivalent to a single data file. Further, Multicast is uniquely suited for the automotive market since hardware activation is not a requirement to receive broadcast content. A typical telematics control unit (TCU) requires wireless account activation before it can be utilized; such activation occurs when the consumer takes ownership of a vehicle.

Visteon invented the back end of this system—the Connected Vehicle Hub—which works in much the same way as iTunes for mobile phones. The Hub is a Web portal tool where an OEM representative manages the download for distribution. The OEM can decide when to send them and to which vehicles—by model year, trim level or even by VIN.

Until now, there has been no way to do this with the telematics control modules or wireless gateway modules in most vehicles. Updates through TCUs had to be performed one car at a time, and each of those downloads was an independent transaction on the OEM’s wireless bill. Imagine sending a one-gigabyte update to 10,000 cars and being charged for every byte, 10,000 times! LTE Multicast sends that one-gigabyte of data to all the cars instantaneously, with a one-time charge by the carrier based on the actual broadcast file size.

LTE Multicast updates often will be delivered over the air while vehicle owners sleep. They’ll install automatically or at a convenient time, indicated by the driver. LTE Multicast is equally useful before a new vehicle even is delivered to the buyer. As each car rolls off the assembly line, its telematics module will receive an electronic program guide, similar to the scheduled-recordings menu on your home DVR. The guide can tell the car: Every Thursday at 4 a.m. for the next three months, wake up and listen for a broadcast. If you hear it, accept the download. If it’s not there, go back to sleep.

For vehicles on the assembly plant’s or dealer’s lot that must be updated to fix a newly discovered issue, this simple, simultaneous updating replaces the current practice of going to each car and manually installing the software—a huge undertaking with thousands of hours for a large “Yard Campaign”.

LTE Multicast also can reduce complexity. Instead of manufacturing multiple versions of a vehicle, each with different infotainment or powertrain calibrations, assembly plants can build them with the same hardware and then simply broadcast different software to each model segment. The same goes for emissions software. Using GPS, LTE Multicast can pick out the vehicles that require software to meet California’s emissions regulations and separately find and download different software for the high-altitude conditions in Colorado.

LTE Multicast can deliver substantial cost savings to manufacturers, increase brand loyalty for dealers and enable consumers to keep their vehicles current. It’s a prime example of finally bringing the best of digital communications to a process that until now has been stuck in the slow lane.

This video shows how Visteon adapted LTE Multicast to demonstrate the benefits of sending software updates to an entire set of vehicles simultaneously.