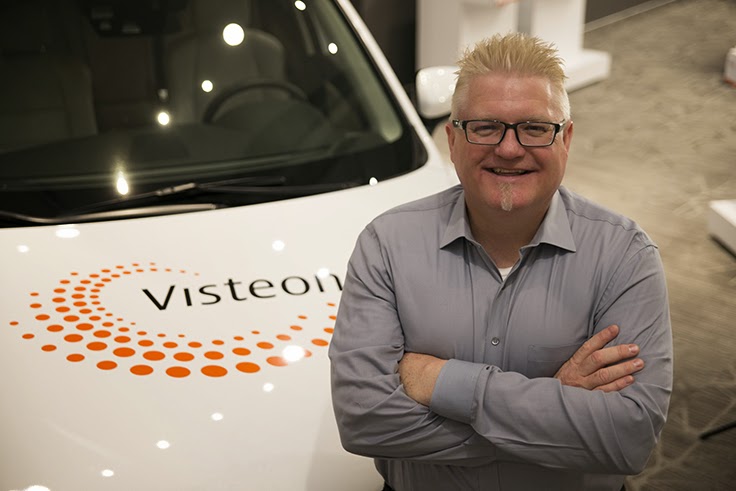 There was a time – albeit brief – when businesses and consumers thought the Internet was just a fad. The same attitude existed regarding social media in its early days. When the iPad was introduced, many people just scratched their heads over why they needed one. Today, no one doubts the importance and potential impact of the latest tech revolution – IoT (Internet of Things). For the first time, developers and consumers are tying together not just virtual worlds but also real, physical things – allowing these objects to communicate and interact with each other.

The Internet of Things is making new connections inside cars and trucks – which is where Visteon innovations surrounding smartphone apps can be found. Today’s infotainment systems can replicate your smartphone’s content onto displays inside your vehicle. What they have not been able to do is combine information from your phone with data from your vehicle to make driving smarter and to provide real-time feedback based on where and how the car is operating. Now that’s all changing.

To illustrate the added capability that this type of connection can offer, Visteon worked with Chamberlain to integrate and enhance its MyQ™ smartphone app into a production Infotainment system. MyQ™ currently allows drivers who are away from their homes to determine if the garage door was left open and, if so, to close it remotely. Visteon has developed an app that can combine data from the garage door and vehicle, as well as OEM-specific graphics and HMI, resulting in the vehicle-integrated MyQ™ Garage app.

The MyQ™ Garage app has vehicle-unique features, such as Park Assist. This feature allows a driver to perfectly position a car in the garage, forgoing the old fashioned tennis ball strung from the rafters. As the car enters the garage, the front tires cross the opener’s floor-level safety beam. Vehicle wheel sensors count the revolutions and relay data to the app showing a real-time graphic on the central display, simulating the car’s position and where to stop. As the system is used, it learns the preferred parking location.

Another example of this technology’s usefulness involves geo-fencing. Within an owner’s Web portal, a driver creates a virtual fence around his or her home. As the vehicle passes this virtual fence, the vehicle navigation system is triggered to check if the garage door is open. If it is, a message is automatically shown on the car’s display, asking if the driver wants to close the door.

Such detailed real-time feedback is not possible with standard smartphone apps, or their in-vehicle screen replication counterparts, such as Apple CarPlay, Android Auto or MirrorLink. While these are all proven ecosystems, that are an everyday convenience for most smartphone users—they do not offer the consumer the complete set of capabilities.

Visteon is committed to giving automakers and consumers the content and features they desire in their vehicles. OEM-specific app stores can co-exist with the current Tech Giants, providing connected apps that inject the hidden intelligence within the vehicle into apps for a new level of smart driving.

Brian Brackenbury is a senior manager in the Technology Office, leading new business pursuits for infotainment, connectivity and telematics. Prior to his current role, Brian led the global engineering activity to launch the MazdaConnect infotainment system, as well as leading core platform development for the connectivity domain. He received his BSEE from Michigan State University and his MSEE degree from the University of Michigan.