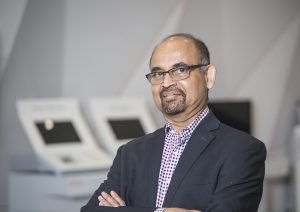 A century ago, many large businesses ran their operations with rooms full of skilled clerks rapidly entering figures into a comptometer, a type of mechanical calculator considered very efficient for the times. After many decades, the comptometer proved too limiting for a rapidly advancing marketplace and was replaced by teams of data entry clerks feeding powerful mainframes. Technology continued to accelerate to the point where the calculating and data entry power of an entire corps of workers could be managed by a laptop. Today, apps have generated brilliant machinery and pocket-sized communications devices, thanks to innovative programmers and billions of lines of code.

In considering the challenge of autonomous vehicles, however, yet another level of technology will be required. Conventional programming and computational approaches to problem-solving will be far outpaced by the speed and complexity needed for automated driving.

The programming approaches for autonomous driving that are currently getting the lion’s share of attention – high-speed cameras, LIDAR and ultrasonic sensors – are unable to incorporate all potential driving scenarios while staying up-to-the-minute with traffic conditions, weather, construction zones and other driving issues. There is an approach, however, that will allow cars and trucks to learn and respond quickly and accurately to their constantly changing surroundings. That approach involves artificial intelligence (AI).

Artificial intelligence allows the vehicle to analyze in real time the massive amounts of data – gigabytes per second – received by its cameras, LIDAR and other sensors to avoid objects and plan the vehicle’s path. Applying AI in an optimal manner involves using neural networks for object classification and reinforcement learning for path planning.

Consumers already are bringing AI into their vehicles via their smartphones. Voice-based search engines and in-car navigation depend on a level of AI from off-board servers, and more infotainment systems are integrating connected features from outside servers that use AI in the background.

To manage an autonomous vehicle, engineers will need to transform AI from its typical location in a room full of servers for computer and Internet access to a self-contained location in the vehicle that, for the most part, does not need to depend on outside data connections. They also will have to solve the challenge of AI’s huge demand for power, resulting in heat generation that must be dissipated, contributing to higher fuel consumption.

Another area that needs to be addressed is which type of microprocessor will prove most efficient. Should it be a central processing unit (CPU), a graphics processing unit (GPU) or an application-specific integrated circuit (ASIC)? Each has benefits and drawbacks in terms of power, performance and cost. This issue is complicated by the need to decide between a CPU, where all information is received and processed, and a decentralized system with several smaller processors. Both have value, depending on how the vehicle manufacturer wishes to establish the architecture.

To meet this demand, Visteon is developing a scalable autonomous driving solution applying AI – specifically neural networks and machine learning. This approach can support either centralized or decentralized processing and can greatly improve the accuracy of detecting and classifying objects in a vehicle’s path. This approach holds much promise for moving autonomous driving from a few real-world examples among a roomful of innovators to an everyday reality on our roads and highways.

Vijay Nadkarni is the global head of artificial intelligence and deep learning technology for Visteon’s product lines, including autonomous driving/ADAS and infotainment. He is based in Santa Clara where he has management oversight of Visteon’s Silicon Valley technology center. Vijay is a hands-on technology veteran whose current focus is machine learning, Cloud computing and mobile apps. Prior to joining Visteon, he founded Chalkzen, which developed a novel Cloud platform for vehicular safety.